"Sometimes I wonder about human psychology. If, in any other context, I saw a rainbow cat indicator addon, I would simply ignore it without a second thought. Now, I see one for my emacs mode line of all places, and suddenly I'm thinking "Awesome! I must install this."" - pyrocrasty

Last weekend I've released a simple minor-mode for Emacs - Nyan Mode. It shows you your buffer position in the modeline with the help of Nyan Cat. It supports animations and wavy patterns.

Because it's a first real minor-mode I've ever written, the whole structure is strongly inspired by sml-modeline. I had to figure out how to display images in Emacs though - it took some time, lots of Google'ing and a little bit of reading source files. I learned quite a bit about formatting text programatically in Emacs - I'll probably turn this knowledge into a blog post of its own. I've initially released Nyan Mode on Hacker News and Reddit. It received some, mostly positive, attention. News about it spread quickly on Twitter. Nyanmacs was also mentioned on Smashing Labs PL. So far it seems that it made many Emacs users laught a bit, but some of them found it useful as well. Since weekend nyan-mode.el was forked 6 times and received one pull request with upgraded images. Also, Amit Patel shared some tips on how to make nyan-mode work with custom modeline. Some screenshots and comments from happy users: 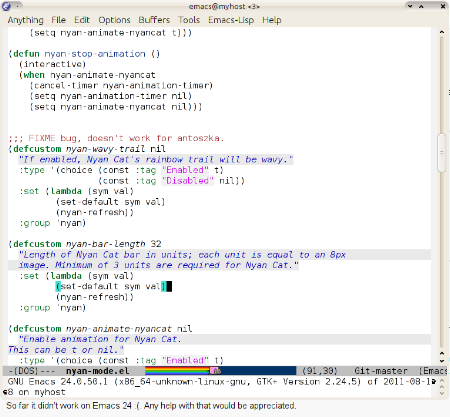 "This has actually managed to settle the texteditor/ide wars here at work. The consensus is now emacs > vim > rubymine. Thanks!!!" - nimms

"Emacs continues to be relevant into 2011" - ewbourget

"Nyan-mode. It's things like this that make me proud to be an emacs user." - mitchellh

"Why emacs is better than vi" - prg

I wasn't expecting to find this mode useful - I did it just for teh lulz. However, it turned out to be quite a nice indicator of buffer position, and thus I'm keeping it permanently enabled in my Emacs. I'm considering writing a more generalized minor-mode, that would allow users to install different graphics sets. There are lots of Nyan Cat conversions out there (e.g. the national ones) ;), and also some people might want to have a normal scrollbar. So, now that we have Nyan Cat for Emacs... Vi/Vim users, what's your answer? ;).